This past Saturday, I had a chance to get out for a short hike in Ralph Stover State Park in Bucks County. This was the first solo hike I was attempting since my achilles surgery, so I wanted to keep it to just a few miles.

I parked at High Rocks as the sun was starting to set and quickly did the mile or so hike down to the Tohickon Creek. Starting my hike so late, there were few other people on the trails and I only passed two other hikers who were on their way away from the creek.

I saw this little frog hopping across the trail as I got closer to the water.

I reached the Tohickon Creek, a beautiful stream that carves as S shaped valley through the park. I’ve explored most of the stream but wanted to head to one nice small rapid to take a few long exposures. After making my way down to the trail that runs along the creek for a short while, I reached my destination. I quickly grabbed my camera and shot a few pictures as the light was fading. 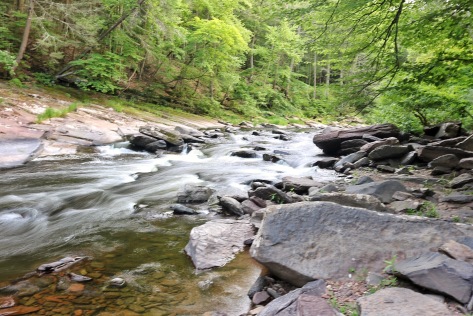 I knew there there was no one within a mile or so of me and the solitude was soothing as I sat and admired the creek for a few minutes. I don’t always prefer hiking by myself, but am glad to have the opportunity on occasion.

With the light really starting to fade to the west, I packed up my gear and headed back toward High Rocks. The creek valley started to fade into shadow as I climbed away, but pink and purple sky illuminated the forest looking the other direction.

Soon I arrived back at the fenced in vistas at High Rocks. The views look south and east and most of the sunset was behind me as I looked out. But small layers of pink appeared low in the sky as I walked between views.

I lingered for 20 minutes after the sunset watching the light fade over the creek some 200 feet below. I returned to the car as the last slivers of daylight remained to the west.