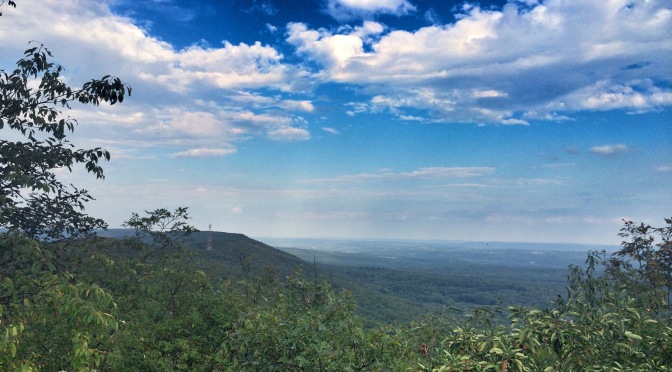 Two weeks ago I hiked a short section of the Appalachian Trail, just south of the Delaware Water Gap. Mike and his dog Dutch joined me for this trip.

We were planning on being at Nelson’s Overlook for sunset, so we got out a little later in the afternoon than we normally do. We arrived at the parking area at Fox Gap along Rt 191 around 3 pm. As we put our boots on and got ready to head out on the trail, about 20 or so Boy Scouts emerged from the woods on the other side of the road. Seemed that we were going to have company on this hike.

The Boy Scouts went on ahead as we got ready to hit the trail. We were soon off on the A.T. as it made its way through a nice section of forest. There is a hunting club at the bottom of the mountain near this part of the trail and gun shots could be heard continually as we made our way.

We reached and passed the sign for the Kirkridge Shelter – the last A.T. shelter in Pennsylvania, a mere 6 miles from the Delaware Gap. After about 3/4 of mile we reached Nelson’s Overlook. The view is a nice one, looking south over the farmlands of Pennsylvania.

It was here we caught up with the Boy Scouts, and their friends. There were four different troops camping in the big field at the overlook, over 50 Scouts in total. We said hello but quickly kept going down the trail. We wanted to cover a few more miles before coming back here for sunset.

The trail became more rocky as we made our way toward Totts Gap. We reached a partial view at a place called “Lunch Rocks”. We took a short break here and enjoyed looking out to the north toward the Delaware Water Gap. We could see the fire tower at Totts Gap from here.

We pressed on a little further. The trail remained fairly rocky and at one point climbed over a huge boulder. We passed a few other hikers and backpackers. We advised a couple that there was the group of Scouts at the vista, and that if they were looking to camp, that they’d be better off heading to the shelter. They thanked us for our advice and continued on the trail. We passed another backpacker, who was out for a solo overnight hike. He too was heading for the shelter.

We soon reached Totts Gap. We stopped for a second in the power line swath there, which features a partial view. The sun was starting to set and we headed back the way we came, with a little jump to our step trying to beat the sunset.

We scooted around the boulder, passed Lunch Rocks, and were soon back with the Scouts at Nelson’s Overlook. The sky was starting to go pink and there was a clear buzz about the vista with the 50 boys milling about.

We snapped a few pictures and the Scouts asked questions about hiking the A.T. and about Mike’s dog. We told them to enjoy their night, it was a lovely night for camping, and finished the short walk back to the car as the forest became dark.