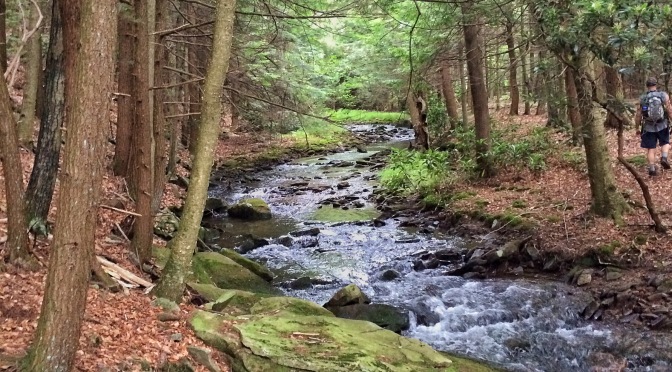 On the last weekend of July, I attended the Keystone Trails Association’s Prowl the Sproul event. I attended for the first time last year and had a great time hiking to Round Island Run Falls and was excited to do it again this year. I didn’t know if my surgically repaired foot would be up to the task until just a week or so before the event, so we forwent camping with the KTA at the Western Clinton Sportsman’s Association and instead camped at nearby Hyner Run State Park. My friend Stubbs joined me for the weekend.

We arrived at Hyner Run at almost 10 pm on Friday after the 4 hour drive up from Philadelphia. We had a great campsite, not even 5 feet from the stream.The campground was about half full and relatively quiet when we arrived. We quickly set up camp and enjoyed a small fire. But soon we were both tired and turned in before midnight.

I awoke early on Saturday. The early morning light was quite nice on the large hemlocks that line the campground. It was cool and dry and looked to be a great day to hike. I packed my bag for the day and soon Stubbs was up too. We had a small breakfast and made our way down to the WCSA.

I was expecting to do the same hike to Round Island Run again this year, it was advertised as one of the available hikes, and it was being led yet again by Jeff Mitchell. Jeff’s book, Hiking the Endless Mountains, is my favorite hiking guide and hiking with him last year was a lot of fun. It seemed that no one signed up for the Round Island Run hike so Jeff changed it to a hike at Clendenin Branch, another hike he had done last year.

Our group was filled out by two other hikers. Nicole had hiked with Jeff and I to Round Island Run last year and was back again this year. And Sam had driven up that morning from Hershey.

We drove out to the Sproul through the small town of Renovo, winding along scenic Route 144. We soon turned off onto Shoemaker Ridge Road, a gravel road that winds its way through the forest. Driving behind the other hikers, my car got quite a dusting.

We arrived at the trail head and set off along the ridge a short way. I swapped stories with Nicole about the hikes that her and her husband had done in the last year as we walked along a flat section of trail. We reached a vista at a power line cut after less than a mile of walking. While not the most scenic vista, it showcased the surrounding area with Shoemaker Branch flowing in the valley below.

We doubled back a short distance and took a trail that led downhill through beautiful forest. After a mile or so, we reached Clendenin Branch. The stream had a decent flow and was higher than when Jeff hiked it last year. He informed us that we’d be crossing the stream about 9 times and that we were probably all going to get wet feet. No one batted an eye and we were all soon shin deep on our first stream crossing. 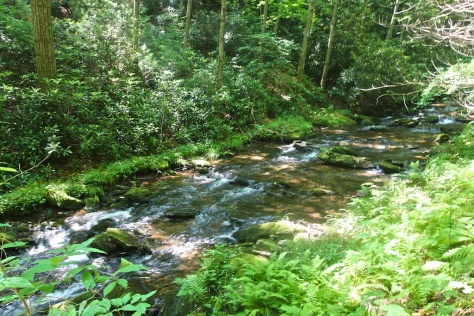 We took a short snack break and sat down on the trail next to the stream. Stubbs shot some underwater video with his Gopro while the rest of us talked about past hikes. Between us, we’d explored a lot of the same streams and even some of the same off trail areas searching for vistas and waterfalls. It was fun to be able to talk to others about these places – this was my kind of group.

After a few minutes, we were off again, moving upstream along Clendenin Branch. The stream tumbled through beautiful forests and we passed small cascades and even a few deep pools. Red bee balm lined the stream occasionally. I found one small patch of stinging nettle. I always find the patch. Always. Jeff and Sam noticed a small northern ringneck snake lounging a few feet from the stream. It sat still for a few pictures.

We passed a nice campsite, though it did have a quite a bit of trash, at the intersection of Benjamin Branch. We crossed the stream a few more times and arrived at a beautiful cascade where we took another short break. We sat on the rocks and took photos, enjoying the serene setting. 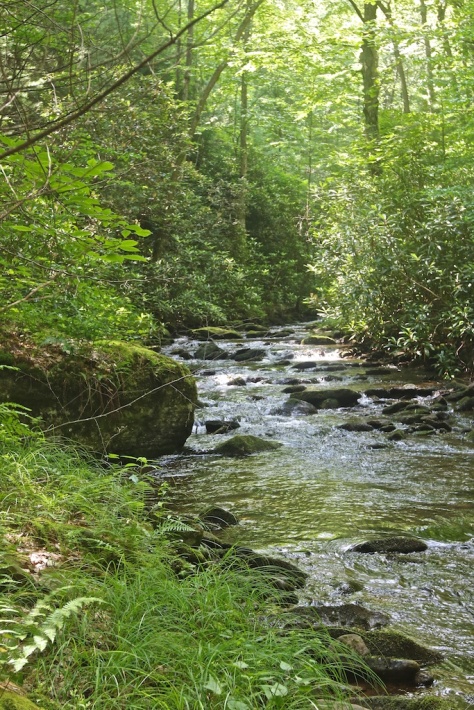 We crossed Clendenin Branch one final time and the trail led uphill from there. The climb was gradual as the trail moved us back toward our cars. We passed a hunting cottage and then arrived back at the road from where we started.

Another scenic drive down Route 120 paralleled the West Branch of the Susquehanna River. We passed a few small towns before turning off in the small village of Keating. We crossed a bridge over the Sinnemahoning Creek – another very scenic river. We wound our way through more gravel roads and my car got dustier and dustier as I drove behind Jeff. We eventually reached the turnoff for Jerry Run Road, a small road that dead ends after a few miles. We had parked on this road to do our Round Island Run hike last year.

A short trail leads from the end of the road to a fine vista looking north toward the Sinnemahoning Creek Valley. We admired the view and took pictures.

We jumped back in the cars and drove 1/4 or so back along the road to another turnoff. Here, a very nice campsite is just next to another fine view. This view looks out over the Sinnemahoning Creek itself and more of the steep mountains of the Sproul. Puffy white clouds floated in the distance and we all took more photos. 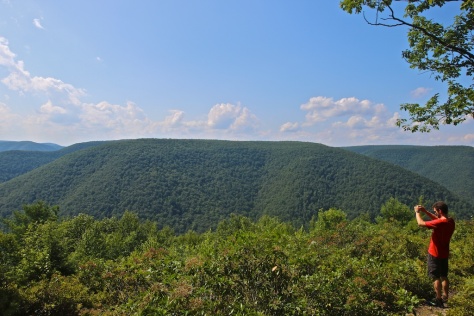 From here, Jeff, Sam, and Nicole were heading just a few more minutes down the road to the Jerry Run Natural Area in search of an old growth forest. Having already completed over 5 miles on Clendenin Branch, I decided not to push my achilles too much and Stubbs and I started to head back toward Hyner. We stopped at the historic Nelsonville Cemetery near West Keating along the way.

But our day was not done yet still! Stubbs dropped me off at our campsite and went to try his hand at some fishing in the Susquehanna. We reconvened an hour later to head up to nearby Hyner View State Park to watch the sunset. Hyner View is one of the finest views in all of Pennsylvania in my opinion and I was excited to be there for sunset.

Distant clouds prevented some of the bright pinks and purples from reaching us, but the sunset was still very scenic. After a short while, Sam appeared from the parking lot to join us for the last few minutes of light. He informed us that the rest of the group did find the old growth forest and enjoyed their time here. We chatted a bit more as it got dark, eventually returning to our cars. While Sam headed back toward home, Stubbs and I took the short drive back to our campsite at Hyner Run.

After a quick dinner around the campfire, I soon retired to my tent. I fell asleep quickly with the sound of Hyner Run flowing quietly nearby, feeling fulfilled by a most complete day in the Sproul State Forest.

Click here to read the trip report for this hike.